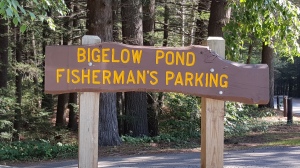 Immediately upon turning into the park you will see this sign. You can park here and fish or you can enter into the park itself and picnic/fish/hike in quite a few spots. In season, weekends, and holidays it gets busy though. 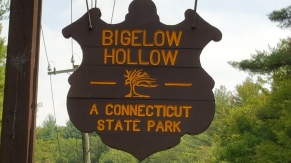 You will see this sign off of Rt. 171 in Union with a well-marked entrance. 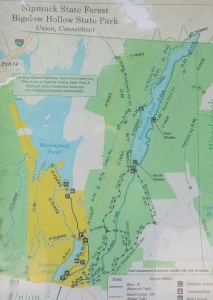 There are several places where it is posted the rules, regulations, signs, trail markings and map of not only Bigelow Hollow but of the surrounding Nipmuck State, too. 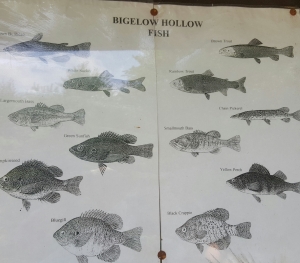 There are a variety of warm water species to fish for as well as trout. 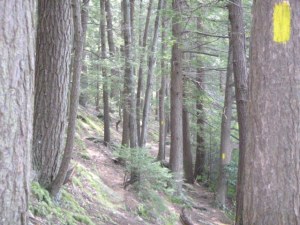 There are very visible trail markings that surround the entire pond. If you stay close to the markings you will not get lost. 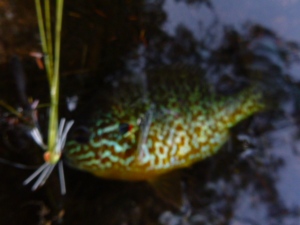 Pumkinseeds are one of a number of sun-fish that are plentiful in the pond. Many of the species of sun-fish cross-breed so you find it hard to find a pure breed. This one looks to be 100% to me. At any rate, if you find sun-fish that looks ” weird ” or is difficult to tell exactly which species it is, chances are it is a cross-breed. 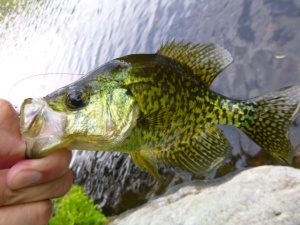 Black Crappies are highly sought after for food because they taste so good. This one was pretty hefty. They are a good fight on a fly rod too with small poppers and bass flies. 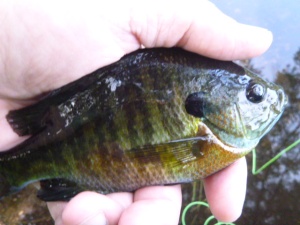 This looks to be a juvenile cross-breed that I was talking about. It has some coloring of an orange breast sun-fish and a blue gill. Either way, they are plentiful and will readily investigate your flies. 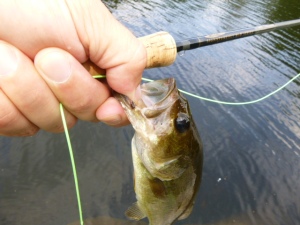 A small bass took one of my pan poppers. I was using my ADG Titanium 7 1/2 foot six weight rod. It is small enough to give me casting freedom along the shore, over whelming power to fight fish quickly and yet soft enough to be a joy to cast and play fish on even the juveniles ! 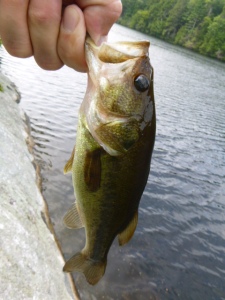 Another bass. This one a little heftier. 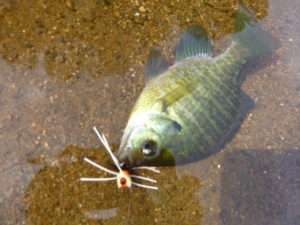 Almost any variety of pan poppers will work. The smaller blue gills have more prominent banding than the fully mature fish. 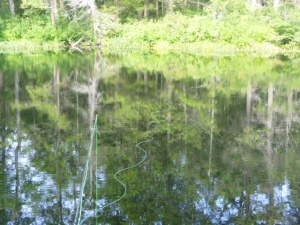 Its tough to tell from this photo but I’ve roll cast quite a ways out there. The six weight line helps load the rod immediately and the power of the rod comes into play as soon as you start to cast. ADG Titanium rods are probably the best roll casting rods out there. I’ve cast most other named brands and I can’t think of another that has the same ability. With just a simple squeeze and tap of the rod, you can easily get 40 feet plus on a roll cast. 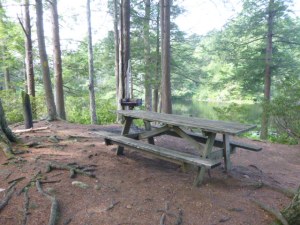 There are plenty of spots to picnic with your fishing buddies, friends, and family. Please don’t litter !

Today ended our meteorological summer but despite that fact, it has been hot and humid. I’ve been running to the Farmington all summer to target trout and cold water but this past week I’ve felt the summer doldrums with that river system and decided that I needed a change of pace. Don’t get me wrong, I still prefer to go after trout first but I will also fish for other species, too. Pan fish, bass, perch, crappies, carp, pickerel and pike are also extremely fun to fish for with a fly rod.

Admittedly, I don’t fish ponds and lakes enough. But, since my son has really taken to fishing this summer, I’ve done more than I have in the past. There are so many ponds and lakes to fish in Connecticut but a lot of them are difficult to fish from shore and/or not accessible by shore. Bigelow Pond is not one of them. Although it is lined with forest all the way around it to the water’s edge, there are numerous spots that are open enough to cast a fly rod. If you know how to perform specialty casts like Joe Humphreys’s distance bow-and-arrow cast, Joe Humphreys’s rolling bow-and-arrow cast, and can roll cast like he teaches, then you’ll love to fish this pond !

Bigelow Hollow ( the park ) is about 600 acres nettled around the Yale, Nipmuck, and Natchaug State Forests. In total, there are thousands and thousands of acres to enjoy in this area even if you don’t fish. Many people hike, picnic, and use the area for water recreation ( canoe, kayaks, boats ), however there is no swimming or wading at Bigelow Pond.

Whatever your outdoors pleasure is, there is something to do in this area especially if you like to hike or fish ! Personally, I plan on having more family outings here.

Finally, a great fishing resource for any of the waters in and around Bigelow and the Union area is JT’s Fly & Tackle Shop in Union. One of the most knowledgeable and best guides around for this area is Steve Babbitt, who guides out of that shop.

Good luck this fall, maybe you’ll see me out there some day. FYI, CT DEEP will be getting ready for the fall trout and salmon stockings soon !