Yesterday was the first day of my 2016 fishing season.  I journeyed to the Yantic to see how it would fish with higher water levels since we received a goodly amount Sunday. Plus, I had some success on it earlier in the fall after the state stocked it and wanted to see if it remained productive.

I arrived mid-morning with the sky partially sunny, temperature around 30 degrees, and the wind mild. However, within an hour or so, that drastically changed and the temperature with the wind chill made it uncomfortable. I don’t mind fishing in colder temperatures so long as it isn’t windy. Besides, I have never done well in the winter when a cold front is approaching and the temps continue to drop from cold to colder. With that said, I thought I might be able to get a fish or two in some deeper, softer water before it really changed.

The river was higher than it has been in quite some time, cold in the mid-30’s, and slightly stained but still very fishable in sections. I chose an inside bend where a riffle cuts deep into a gut/drop-off and then turns abruptly and creates a deep and slow corner seam. I figured the trout that normally would be nose to gravel on the edge of the riffle/drop-off would move closer to the shoreline and softer water. And, I was right. I ended up catching two rainbows back-to-back within an hour. One took a white minnow pattern fished dead drift nymphing with a brown wooly worm dropper. The other bow took the dropper. Each fish was a decent stocker that the state put in this fall. The male one might even have been a hold-over from a previous stocking.

With two caught and released in a pretty  short amount of time for winter fishing ( mind you that every few casts I’m placing my hands in my waders and holding hand warmer packets ), and with the wind gust getting stronger by the minute, I took that as a sign to quit while I was ahead and revel in the new year’s successful outing. 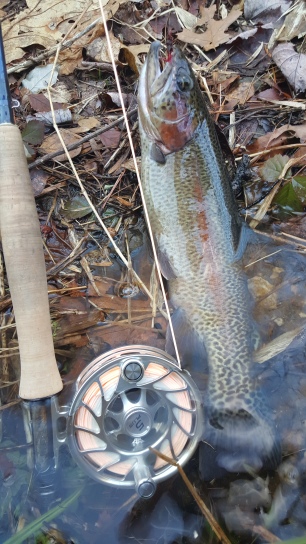 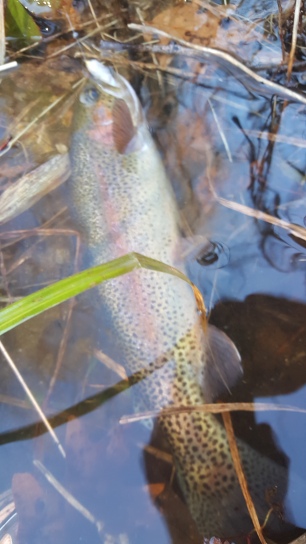