My son and I were fortunate enough to have the time to join other members of my TU Chapter ( TVTU # 282 ) to tour the Quinebaug Valley Trout Hatchery on October 22nd. My son had a blast and the tour with staff was quite an enlightening experience. There was so much information provided and discussed that it is difficult to remember it all. But, my brain is not entirely full of emergency medicine and can still process other stuff, which for me, revolves around fishing- everything else- there’s not much room…haha. So, I’ll try and pull out the most relevant and useful information from my synapses and pass along what I  can recall. I hope it will enlighten you too. 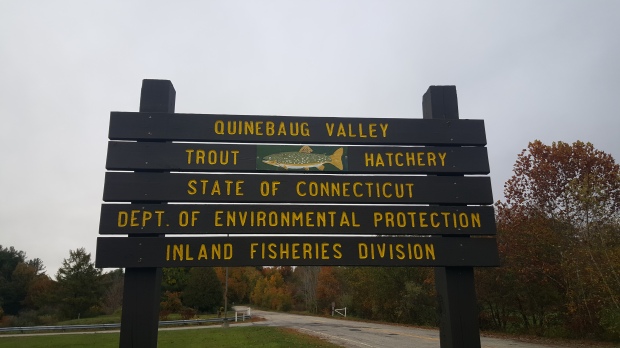 This is the largest and one of three hatcheries within the state of Connecticut. It is primarily tasked, along with the Burlington Hatchery, to provide stockable size trout for recreational trout fishing on our rivers, streams, lakes, and ponds. The Kensington Hatchery is specialized and perhaps in the future I’ll write something about that one.

Connecticut’s trout hatchery system exists in order to provide supplemental trout fishing since natural reproduction would not be able to sustain the pressures of thousands of anglers each year. At best, a wild trout could take up to 3-4 years to reach what is generally considered stockable size ( 9-15 inches ). At this hatchery, trout can reach this size in as little as 16-18 months.

This hatchery was established in 1971 and is one of the largest and most modern hatcheries in the entire Northeast. It produces roughly 500,000 to 600,000 trout per year that are in the 9-15 inch range. It also holds large broodstock fish that can produce around 2.5 to 3 million fertilized trout eggs each year.

It also produces another 250,000 trout each year that gets transferred to the Burlington Hatchery where they will be held until they are stocked in the spring.

The state of Connecticut takes their disease free fishery status very seriously. These are huge barrels of Formalin that they dilute to create the solution that they use to clean the tanks and ponds. They also have tubs, trays, and matts that have this stuff in it and as you move from one building to another, you have to decon your shoes. When you stock, the nets used are to remain contaminant free as well- meaning that they can not touch the water otherwise they are isolated and decontaminated before use again.

Having ” disease free ” fish allows them to produce more quality fish and avoid any mass killing within the tanks or grow-out ponds. It also allows the state to sell the fertilized  eggs and trout to be sold to other surrounding states- Rhode Island is one of them.

This one of the 48 or 50 six foot tanks within the Hatch House. This is where the sac fry and fingerlings  are moved to after incubation and reared until they are large enough to be transferred to the intermediate building.  Each tank has rough 50,000 fish and as they grow it will decrease to roughly 5,000 on down to 300 or so until they are moved again to a grow-out pond outside. From there, they will wait and continue to grow until they are stocked.  Unfortunately, we were not able to see the eggs and incubation due to it being beyond that time frame. As you might imagine, it is a very systematic process and kept to a regulated schedule as much as possible. 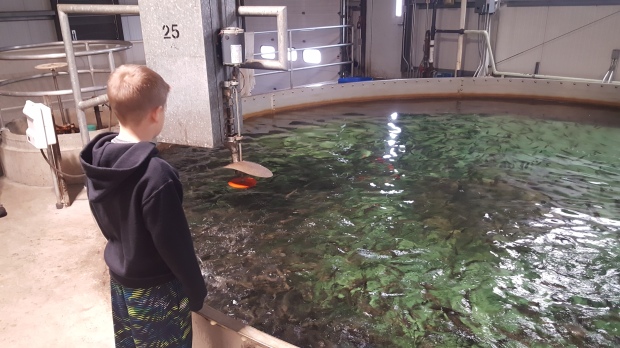 This is my son, Jacob, in awe as too how many fish are in each tank. I’m not sure how many were in there but, this is one of the 20 foot tanks in the intermediate building. This is where they are feed fed by timer and start to pack on size and weight.

Here he is touching a broodstock rainbow. As I have stated before, this hatchery does hold on to some broodstock. They are kept in these long cement tanks for spawning purposes. Fish are separated out as they spawn so that they can be stripped  of eggs and sperm. One of the tricks to see if a female is full of eggs or not is to see within the tank where they are. If they are near the bottom of the tank, then they are full of eggs. 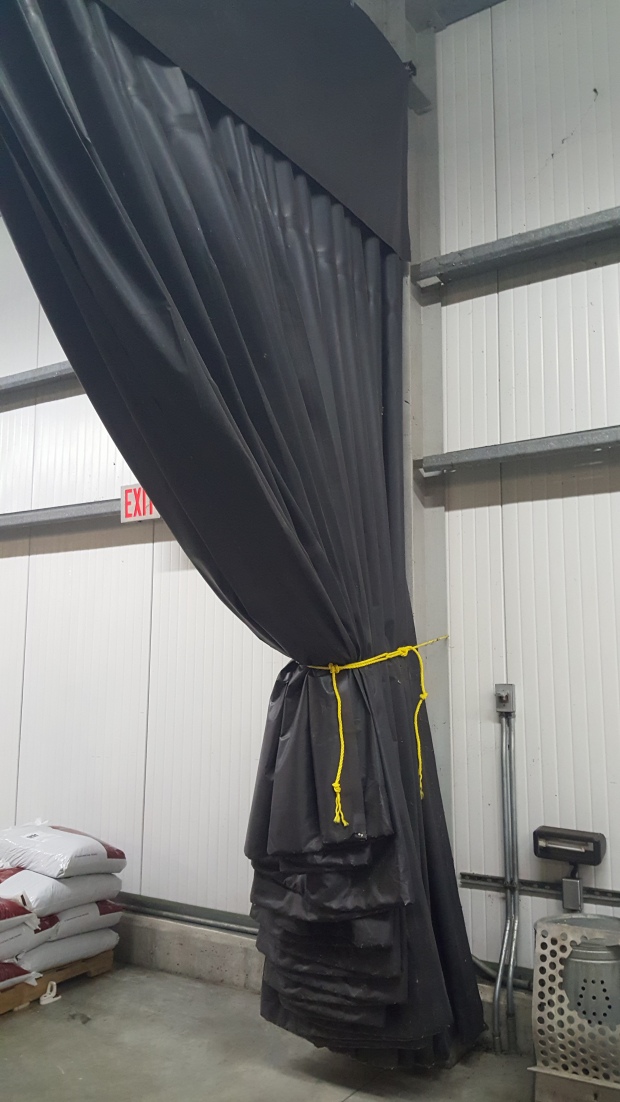 To artificially produce daylight changes as one of the spawning triggers, the hatchery uses these giant curtains.

Jacob is learning what the color of each pipe means. The hatchery is down to using roughly 2200 gallons of water per minute from 5,000. Age of the hatchery, drought, and budgetary cutbacks have all attributed to a decline , somewhat. This hatchery is under the process of reconstruction and modernization which should help in the future.

The water that they use in the hatchery gets recycled a lot and by the time it reaches outside, it is not as clean and pure. The white and light blue colored pipes signifies how clean the water is. The smaller fish in the outside grow-out ponds as well as brookies can not tolerate less clean water and are held in certain tanks. 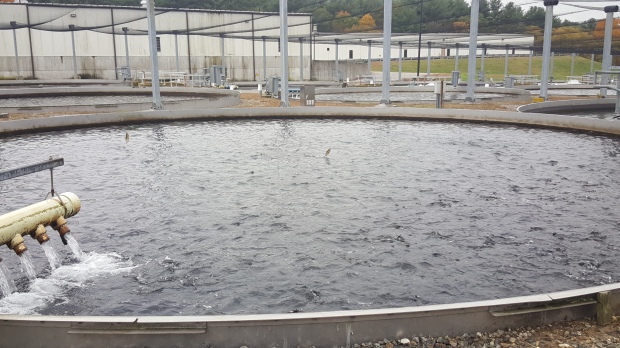 This is one of the 50 foot grow-out ponds/tanks outside that are covered with nets to combat avian bird as well as other animal predation. From here, the fish are reared until they are stocked.

I love small brooks and streams and cherish fishing for native brookies and browns. I also love traveling throughout this state and fishing new waters each year. This state has a lot of publicly accessible trout fishing , and quality trout fishing, in part due to supplemental trout stocking. Fishing over stocked fish for the first few days and/or weeks after they are put into a river, lake, or stream might not be the most demanding fishing out there but without the hard work from DEEP staff, we as fisherman, would not have nearly the quality of fishing that we are fortunate enough to experience all year long !

So, the next time you see anyone from the DEEP in their vehicles stocking fish or game, surveying land, or taking water samples, stop and thank them. They earned it ! Also, I encourage anyone to join their local Trout Unlimited Chapter and get involved to help protect and conserve our fragile resources. With the cooperation of the DEEP, we can accomplish a lot of great things. In addition, take some personal responsibility and pick up after yourselves, ask permission to fish private lands, and if you desire to keep fish, take only a few at a time from any give spot. Every little step helps in the overall effort to maintain quality trout fisheries.