Last month myself and my friend Rowan journeyed to Pennsylvania for a number of reasons. First, I had to visit Joe and his family and attend a benefit dinner by the Pennsylvania Fly Fishing Museum where Joe was the guest of honor. Also in attendance was George Daniel and Greg Hoover. George, who is one of Joe’s students and one of the world’s best fly fisherman, gave a very touching speech about Joe.  Greg, who is one of our nation’s most famous and well-respected entomologists, gave a presentation on the ” Little Blue Wing Olive “. It turned out to be an excellent event. Rowan had never met Joe and I felt he would greatly appreciate meeting a living legend and one of his fly fishing idols. Unfortunately, due to a few other circumstances, Rowan was not able to spend any time with Joe on the stream… perhaps another day though !

Another reason Rowan and I went to PA is to fish Spring Creek and possibly some other famous Limestoner’s of Central PA. Again, Rowan had never fished in Central PA and I felt that he would have a blast fishing some of the most famous and historic waters of Pennsylvania and of our nation. As it turned out, we were only able to fish at Benner Springs and Fisherman’s Paradise with the ” Paradise ” being our best hope for fish since Spring Creek and everywhere else was at flood stage.

The ” Paradise ”  is a fly fishing only section with no wading allowed that has challenged even the greatest fly fisherman in history both past and present and is considered hallowed ground by many.

Well, we were gonna get a testing on our trip because Spring Creek on average runs around 99-100 c.f.s. and that weekend it was consistently in the upper 300’s, near 400 c.f.s- essentially flood stage ! And Sunday morning, our last day, we saw it rise even higher !

So, despite horrid conditions and dismal weather projections, we still had to fish NO MATTER WHAT  ( it did help that we didn’t have to wade because that would have been suicidal ) !

I have been with Joe when conditions were like this and even though the river is flooded, he has said before ” they still can be caught “, hence the title of this blog. And I’ve witnessed him doing it, too !

Here are some ideas to think about and consider when you try to fish water like this:  fish close, very close; fish velocity changes; fish edges between clearer water and muddier water; fish deep and fish SLOW most of the time; and fish around structure. 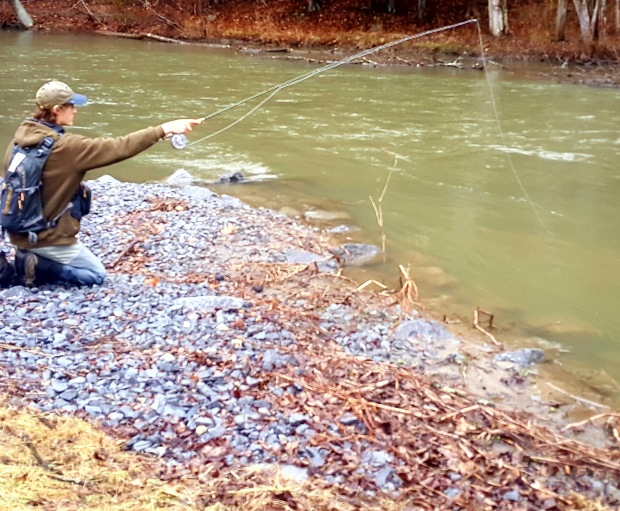 Look at how close, low and slow Rowan is fishing. Also, by fishing tight to the bank, he is fishing water that is a bit clearer, calmer,  and slower with lots of velocity change.

This one he picked up literally on the bank in and among some debris that was pushed into a little crevice and created some break in the water and shelter. Several of our fish were caught sight fishing ON THE LAWN of the grounds if you could believe that. 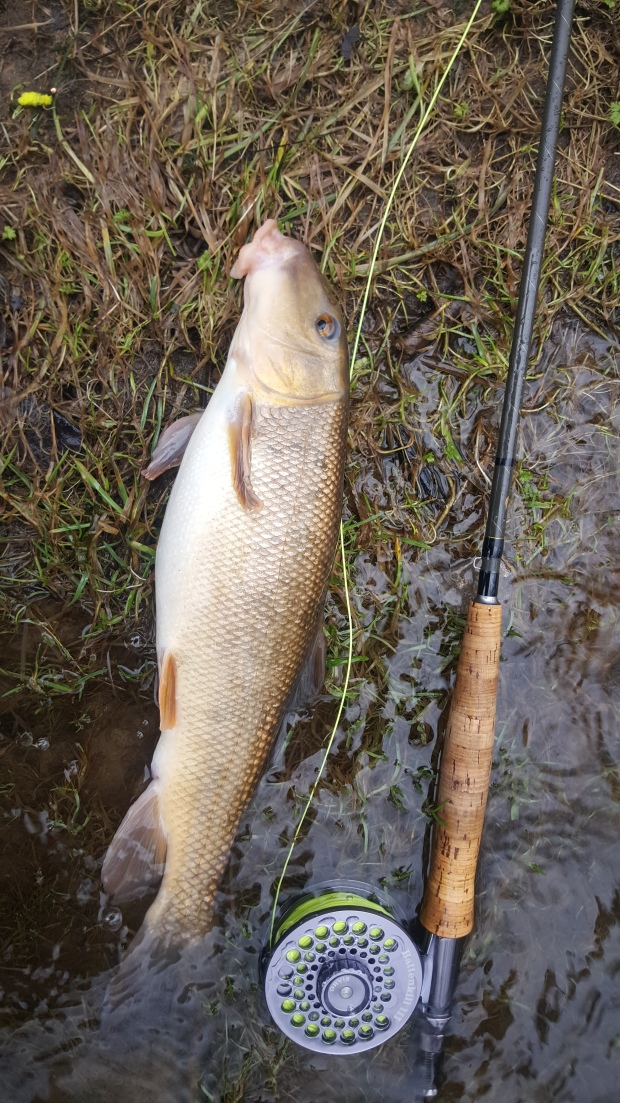 The suckers are just about to start their spawning process in Central PA and I caught this one nymphing slow and deep with a ” junk ” fly, a Chartreuse Mop Fly. Yes I felt bad doing it but with flooding waters you need to use big flies, bright flies,  flies that move, provide motion and have a bit of flash in them.

I also caught a few wild browns in the same kind of water and near the suckers. The water was slow and deep and slightly less ” brown ” than the main flow which was a torrent. They also took the mop fly because they could see it and perhaps some suckers were laying eggs, who knows ? 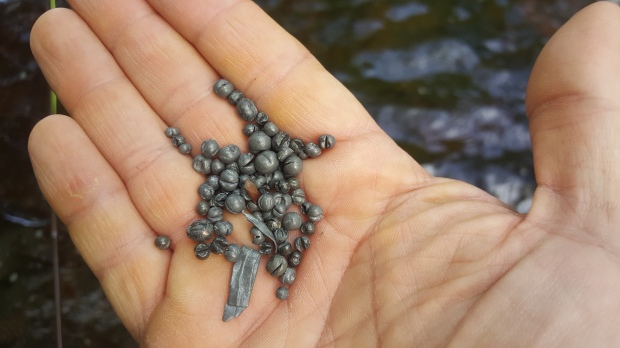 By getting into the right position, using a tuck cast, using the right leader, and using the correct amount of weight, I was able to stay on the bottom long enough to pick up fish.

But, a good portion of our fish came from fishing a Filet Mignon for the trout.

Sculpins ! Even with these guys, we had to use a lot of weight, fish them deep, and fish them right on the edges of the bank and/or SUPER tight to any kind of structure that could have given a trout some relief from the current. 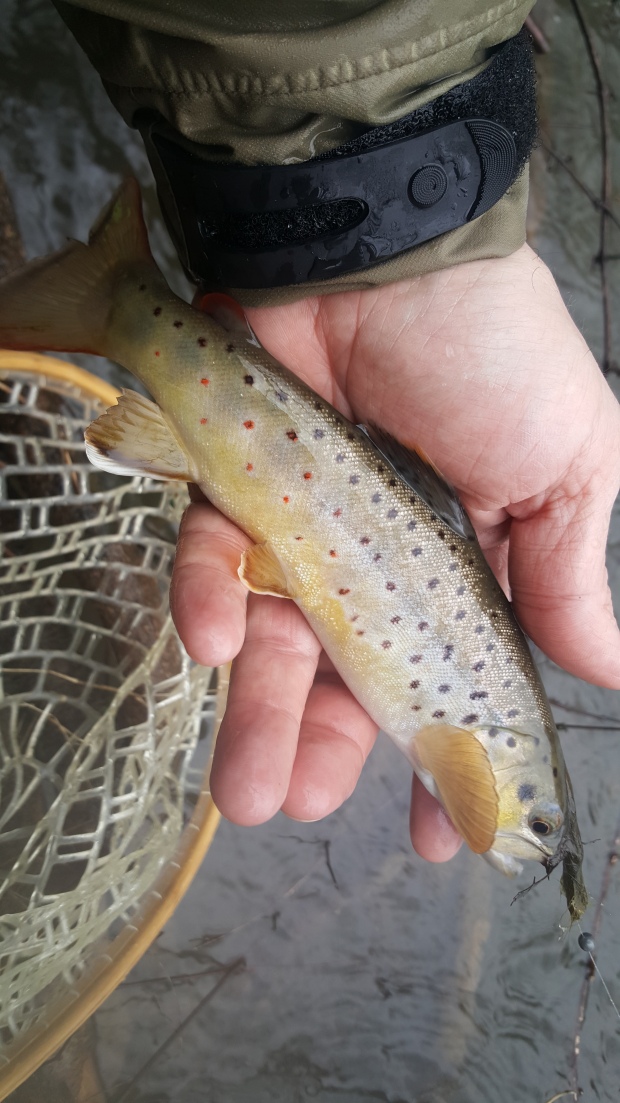 Remember when I said we were fishing the lawn of the grounds ? Well, I wasn’t kidding ! We were sight fishing for the smaller browns with cress bugs. They would root and tail like a bone fish or carp in the grass for cress bugs pushed into the grass by the water. Rowan had captured some very cool pictures and a short video of it. Check his blog out on Connecticut Fly Angler. His blogs are worth reading by the way. 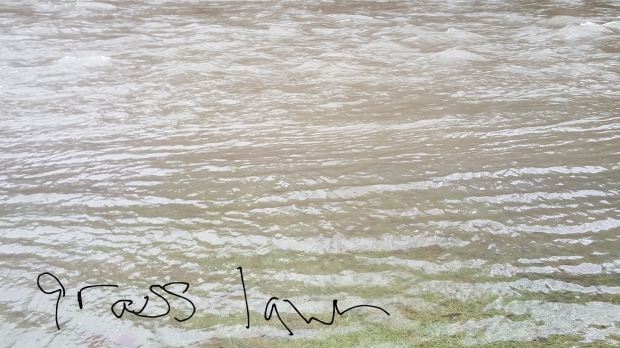 By being observant and figuring out where trout might be in a flood, you can often find what you are looking for. Again, this is a spot where the grounds keepers will be mowing soon….hahaha. 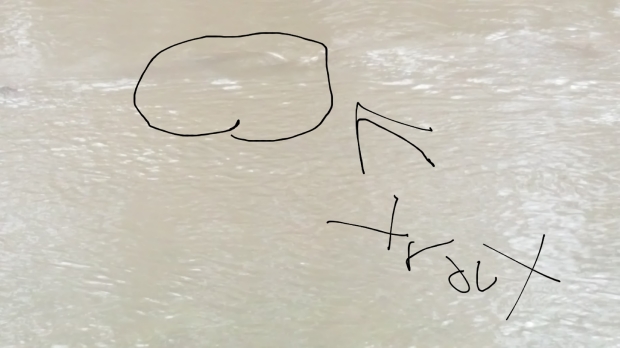 This creek is just loaded with wild browns around 9-10 inches with sizes much larger, too ! We really didn’t get into a hogs but Rowan caught a beautiful brown around 15-16 inches and missed one in a back channel that was much larger. All in all our numbers were very good considering what we were up against and left Rowan jonzing for another trip before we had even departed for home…I think he’s hooked on PA !

This is what makes Central PA so special. Limestone…oh how I wish you were here in Connecticut !